Lapierre's quality crafted bicycles come from over 60 years of experience in cycling innovation and technology. The company was created in Dijon, France in 1946 by Gaston Lapierre, who decided to take advantage of a rapidly growing bike industry. As his small business grew and built a name for itself, he handed over management to his son, Jacky Lapierre in 1960.

Their bike company thrived in the pedal-friendly environment of Dijon and Lapierre bicycles soon became the popular and highly regarded machines cycling enthusiasts wanted to ride. Then, as the 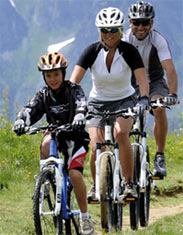 world of mountain biking emerged in the 1980s, Lapierre was one of the few European companies to anticipate its popularity and sponsor athletes, which jump started their development of cutting-edge off-roaders too.

And soon, while most cross-country racers were rocking hardtails in competition, Lapierre's riders were winning championships on full-suspension rigs from the company. This success then led Lapierre to branch out into professional road racing, where they signed with the team Française des Jeux in 2002.

Lapierre's passion for cycling, stellar craftsmanship and long history of technological innovation make them a world leader today. And, among their many fine bike models there's one to suit almost every cyclist, from the hard-core racer, to someone just starting out, for the off-road adventurer to the world traveler (check out their Passport folding bicycles). There's truly something for everyone in Lapierre's collection. We look forward to showing you our wide selection and helping you select the ultimate ride. Our locations & hours.

Some Lapierre Bikes in our catalog (not available in Norman)