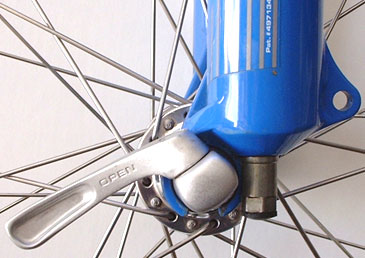 There are three ways to tell if the quick-release lever is doing its job to securely hold your wheel in place on your bike.

1) Most levers have the words "Open" and "Closed" stamped right on them, so look for that. The quick release in the photo reads "Open," meaning that the wheel is not properly fastened and it may come off–even if the wheel and lever feel tight!

3) If a quick-release lever sticks out from the frame (isn't flush with it), that also means it is not fully closed. It may seem to be holding the wheel(s), however, a protruding lever is not locked shut and it's possible for it to come loose or get knocked loose if you bump it into something. Be sure to close the quick release fully if you see this to ensure your safety.

Please note, that even if the lever reads "Closed" and looks right, it's a good idea to test how tight it is by trying to open it by pulling on it with a little effort. If it resists, it's tight and safe. If it opens with only a little effort like this, it's not tight enough. Follow our directions to tighten it.

Adjusting and closing your quick release

To do this, open the quick-release lever. Now, hold both ends (one on each side) and turn one clockwise until, when you close the lever 180 degrees, you feel some resistance. At this point, try to close the lever fully.

The quick-release tensioning adjustment is correct when you can fully close the lever only with some effort. A good way to do it is by pressing it closed with your palm. This lets you put your fingers behind the frame to help squeeze the lever to close it (the lever should be tight enough to leave its impression in the palm of your hand). If you can only close the lever part way, open it, unscrew the adjustment slightly and try again.

Removing and installing your wheel

Most forks have wheel-retention tabs on them, which are small protrusions that keep a loose wheel from falling out of the dropouts to keep you safe in the event your wheel loosens. In order to remove and install the wheel, the quick release must be open and adjusted by unscrewing the end(s) to clear these tabs.

To do this, hold both ends of the quick release and turn one counterclockwise to unscrew it until there's enough clearance for the wheel to drop out of or fit into the fork (note that this adjustment is unnecessary on most rear wheels because rear retention tabs aren't used).

If you have any questions about quick release use, just let us know and we'll be happy to explain more in person!